No – The sound of saying no and the action it indicates to the pup once learned is extremely important. Training a puppy to live in your home begins immediately. When you put the pup on the floor the 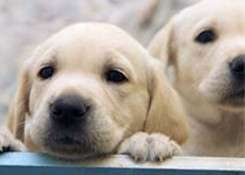 very first time the length of time until they are “into something” is governed only by the pup’s mental and emotional make up.

That being said it “ain’t” a long period of time. Puppy training starts now. Yelling has no place in training the pup what he can and can’t do in the house (or training them for anything for that matter). Also, the solution is not “putting stuff up” this is only the pup governing you instead of you governing the pup. He/she must learn that certain items and certain activities are none of the puppy’s business. The pup just needs to learn what these items and activities are and you are the one to teach them. This is where “no” comes in, a pup over time must learn that certain activities they are engaged in or about to be engaged in are off limits.

For example, if the new pup is headed for a pair of shoes sitting by the door, picks one up and starts playing with it. Calmly go to them and take the shoe while saying no. This is important, do not take the shoe and put it away you will have taught the puppy nothing! Replace the shoe where it was and if he/she goes after it again repeat with a firmer “no”. Not yelling but firmer. No yanking the shoe from them in anger, no cuffing them up aside the head. Take the shoe while firmly saying no. Dogs learn virtually everything by repetition. And if the repetition is done properly and here is the big one, consistently it is many times quite surprising how fast they learn and sometimes even how few repetitions.

No – Learn to use the word in varying degrees of firmness not rising to the level of yelling. Not done with anger – a dog knows anger and does respond well to it – None of them!

When using “no” to train your puppy it is important to keep in mind that the he/she does not understand English and will never understand English. When a dog learns to responded to a certain word like “come” by coming to you it is because he/she has learned that when they hear the sound coming from its pack leader, if everything works out right that’s you, it has learned that means come to you.

The number of command sounds (word sounds to us) a dog can master is really quite amazing. The point being when you find Fido knee deep in closet the response should not be Fido get the heck out of the closet or No Fido get out of the closet. These just confuse the pup. Just say no and remove them from the closet or any other endeavor they may be engrossed in.

Remember in any kind of training the less said the better, get in the habit of not trying to converse with the dog any time when handling them except for one word commands.

With this method you teach your pup everything they can and cannot done in the house from the leather couch, wooden chair leg, socks, schoolbooks, curtains, trash can content and on and on. Once done you will have created a good new citizen as part of your world.

And there is little better than a good citizen dog as part of your family.

Learning what the sound of “no” means is very important and very useful in your dog’s life. Once they are spending more and more time afield the command “no” is important in keeping Fido out of undesirable activities – Dead skunk comes to mind.

Need a product that’s not listed?

Send us a message with the product information and we'll find it for you. Contact Us