Well the new puppy is home and is full throttle into becoming part of the family. And in their mind king/queen of the castle. It is your job guide them not to becoming royalty but instead towards becoming productive, good citizen as part of your family. 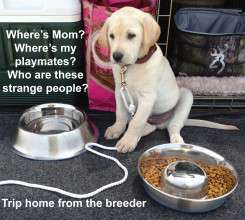 Puppy Training – The Early Days will focus on the training, well-being and life of an eventual full-fledged hunting dog that will spend its life as part of the family. I will focus on the first six months of your new dog’s life.

When training your puppy (really dogs’ period) it is important understand that every dog learns in a different way and at a different rate.  Not completely unlike humans, dogs learn at varying rates and times during their lives. This is not to be confused how smart the dog is, how good the dogs nose is or how fast the dog is learning. It is hard to find a pup that is not capable of learning something although, again not unlike humans there are those (dogs and humans) that will make you think otherwise.

Keep in mind in some cases we as trainers are more of an inhibitor to learning than the capabilities of the dog. Some puppies will learn to sit in a day or two while others may take a week or two or even longer. This does not mean that either dog will never be a good hunting dog as the important thing is that they did learn to sit. Same goes for kennel, come, stay, place etc.

House training is a perfect example, virtually every dog is different. We once housebroke a male lab in 7 days, the dog lived to be thirteen, lived his entire life in our home and never once relieved himself indoors. Another male lab took two months, same technique and same people doing the training. The end result was the same, once housebroken they both were very well house broken. And both were great adults.

Everything a dog must learn is successful according to each dogs’ personal characteristics. What one dog learns at seven months and another may not learn until 12 months but will more than likely end with the same quality of the result. Applying to everything from sit to a retrieve involving multiple marks.

A puppy’s first six months of training should be restricted to fundamentals. Sit, stay, come, name, place, kennel, heel, the meaning of NO, cultivating interest in birds, house breaking, and fun retrieving.

Outside of certain obvious things a pup should be allowed to do about whatever they want in their first six months and to lesser extent up to year. Explore, play, run, jump, act goofy and even get themselves in predicaments. Whenever a pups find themselves in a predicament unless the potential for injury is involved give them the chance to work their way out of it. Solve the problem themselves. This carries over to older pups as well. Anytime a young dog finds themselves on the wrong side of a fence or can’t find a dummy give them plenty of time to figure it out on their own. You want a finished hunting companion that is not afraid to think for themselves. You want confidence and enthusiasm in reacting to his world. Give them plenty of time to play and explore all the time learning these skills.

Communicating with You Puppy

How and when you communicate with a puppy, or adult dog for that matter, is very important. NO YELLING, and lord knows this is a tough thing to master without the patience of Mother Teresa.

You can train a halfway decent dog with some yelling, but a great dog or even a really good dog probably not. If you can eliminate yelling in dealing with your dog, your life and that of the pups will greatly improve.

The puppy will train better, mind better and be a better companion. Why, because you will both be better at all the things mentioned or will mention about training the pup. Yes, it difficult especially when Fido does certain things that are extremely aggravating. But correct him/her without raising your voice. Dogs can sense anger, fear, frustration etc. in the human voice and they do not respond well to it. They will, once trained respond positively to a calm, firm command that they understand.

One thing that should be understood no matter what some may say your dog does not understand English, period.

When a pup is sought to sit they do not think “Um sit I know what that means” and then sits down. Nope the pup will however learn sounds and learn to associate sound with an action he knows you want him to take. He learns this through many repetitions in your short training sessions. If trained to do so the pup hears “heel” and he knows things will go better with the pack leader if I go sit beside him, facing forward and even with him and the quicker the better. “May even be a pat or food (treat) involved”. It is really amazing the ability of a smart puppy to learn and associate action with sound. If number a pup is capable of is not infinite, it is a whole bunch.

Thanks for reading our article. This is part of a series so watch for more stuff on a
Puppy Training – The Early Days.

Brought to you by: